Abruzzo is the home of the Cerasuolo d’Abruzzo hearty rosé wine. Abruzzo is located between the Adriatic Sea and the massifs of Gran Sasso d’Italia and Majella in Italy.

Over 65% of the wine making territory area is the inland hilly and mountain region which has a continental climate. The remaining is the hilly strip coastal area with a mild climate.

The Abruzzo region accounts for 6% of Italy’s wine production with red wine comprising 60% of its production. Within Abruzzi, 83% of the wine is made in Chieti, 10% from Pescara, 6% from Teramo, 1% fro L’ Aquila. Roughly 75% of the overall production is from Co-ops and 32 of them are located in the Chieti province.

The predominant grapes grown are the Montepulciano (red) and Trebbiano (white) grapes. The Montepulciano grape is also used for the traditional Cerasuolo, a hearty rosé.

In October 2010 a separate DOC (PDO) named Cerasuolo d’Abruzzo was established exclusively for the rosé wines. These wines were formerly labeled as Montepulciano d’Abruzzo Cerasuolo.

These rosé wines are made with a reduced amount of time in contact with the grape skins and the fermenting juice creating a cherry color. The less time with skin contact results in a less tannic wine with brightness and fresh fruit flavors.

A minimum of 85% of the grapes for these wines must be the Montepulciano grape. The remaining 15% of the grape varieties must be suitable for growing in the region and of a similar color.

The wines cannot be released from the winery before January 1st of the year following that in which the grapes were produced.

Also, the wines cannot be released from the winery before January 1st of the year following that in which the grapes were produced.

See our wine review in our blog by clicking HERE. 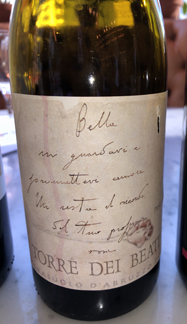